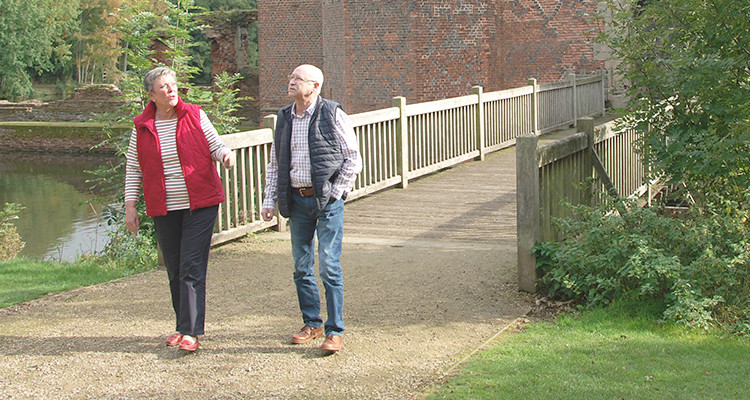 Yes, that’s right. Husband and wife Mike and Maggie both have a stoma. Both were extremely poorly, but they are amazingly positive about life, and their beloved family. We first met Mike and Maggie during a story for the Spring 2016 edition of Linkline, just six weeks after Mike’s operation. The couple inspired a return, and so we meet them again in a Linkline first: a ‘His & Hers’ Our Story...

Diagnosed in 2005 with bowel cancer, Maggie had a stoma formed, before nine months of chemotherapy.

Just before the end of the treatment, she was given the opportunity to have a reversal – and so, in 2007, she went under the knife again. However, after ten days, she started to feel unwell. She was taken into hospital with a perforated bowel and septicaemia. The reversal operation had gone wrong; the bowel had ruptured. She was put on life support for five days and spent two weeks in intensive care. Maggie’s Stoma Care Nurse was Kate Howlett, who is now a Senior Nursing Manager at Salts Healthcare. Maggie remembers saying to Kate:

While on the road to recovery, Maggie broke her hip gardening, which slowed the healing process down, and then in 2009 it was decided to re-site the stoma as it was so difficult to manage. After the move, life got a lot better. Normality was getting closer. In 2010, Maggie took part in the Swimathon for Marie Curie. She said: “I have swum all my life, and this felt great. I swam non-stop for 1.5km and raised over £500.”

Maggie has another swimming story. She laughs as she tells how Mike wrapped her in cling film while in Majorca so she could swim.

“I wanted to be as normal as possible and, with Mike’s ingenuity, I was able to do some of the things I love. One of the things that upset me the most is that Mike had to give up work. He was an engineer, with a successful firm. He gave all of that up for me, which is amazing.”

Mike has always been fit. He has never even broken a bone! He has looked after Maggie for a decade. Then, on one of his regular ‘man health checks’, he got some life-changing news.

His iron levels were very low and, after some physical checks by his doctor he was referred for some tests, before a camera down into his stomach found Pseudomyxoma Peritonei, which is commonly known as ‘Jelly Belly’.

Mike said: “I carry around a piece of paper with the name of my condition on it because it’s so rare and difficult to spell.” The condition causes a ‘gel’ to adhere to the organs. It’s rare – only two in one million have it – and it’s deadly. The tumours cause fibrosis of tissues and impede digestion or organ function and, if left untreated, the tumours and mucus gel they produce will fill the abdominal cavity. This will result in compression of organs and will destroy the function of colon, small intestine, stomach or other organs. Prognosis with treatment is in many cases optimistic but risky, but the disease is lethal if untreated, with death by weakness and wasting of the body, bowel obstruction or other types of complications. Mike had a procedure called ‘de-baulking’, whereby the mucus is scraped away from the organs, but they couldn’t operate on the large bowel, which was taken away. Hence his bag.

Mike said: “There are only two places in the UK that do this procedure: Manchester and Basingstoke.

It was a 10-hour operation, I had 50 staples from my chin to tummy, and was advised I may have a stoma when I woke up.

Obviously, I knew a lot about stomas and it was the only bit I could get my head around. To be honest, that was the least of my worries. I didn’t even know if I was going to wake up again…”

If you met them in the street, you’d think they were 10–15 years younger than they are. By their own admission, they don’t take life too seriously. Maggie’s stoma is called Bridget; and Mike’s is Bobbie. They say: “Each day is a bonus and we rejoice in our lives. We enjoy every moment of life and still do what we want – maybe a bit slower sometimes, but we are content and positive about life. The future is bright!”